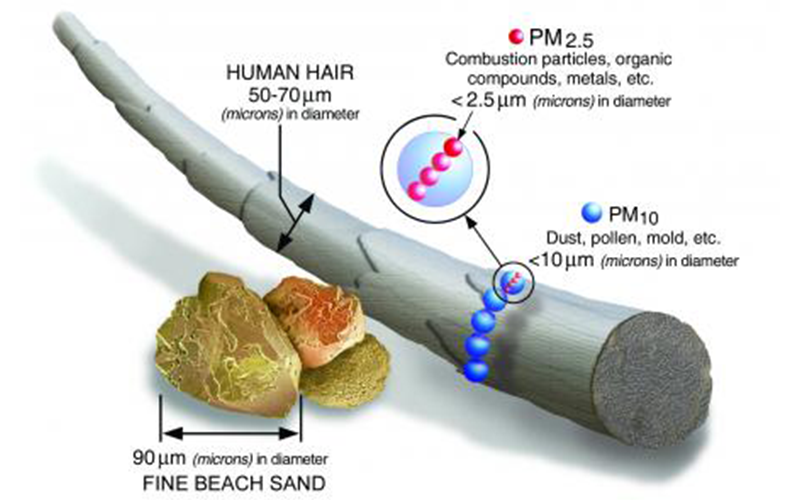 The international standard ISO 16890 categorises particulate matter as PM10, PM2.5 and PM1 which respectively defines the air concentrations in liquid or solid particles whose diameter is below 10, 2.5 and 1 micron.

These are the particles that pose the greatest problems to health because they are inhalable, potentially getting deep into the lungs and absorbed into the bloodstream.

Impact on the lungs

– Course particles (larger than PM10) are retained in the upper airway

Mechanical filters are efficient over a range of particle sizes as particles are found to respond differently to methods of capture according to their size.

Traditionally, filter efficiency was based on effectiveness at 0.4µm, as this is one of the most difficult particle sizes to filter. However, efficiency ratings now take into account that particles under 0.4µm are captured by diffusion and those larger than 0.4µm predominantly by interception. This gives a much more meaningful indication of the work that a filter is actually doing.

No matter what size, particles are dangerous to health. Although our natural defences allow us to expel large particles by coughing or sneezing, they can cause irritation to eye’s, nose and throat.

Smaller particles pass through to the lungs. Once in the lungs, particles below 0.1µm are likely to be absorbed into the bloodstream and circulate the body.

– inflammation of the lungs

Particle pollution is either mechanical or chemical. Coarse particles are typically the result of mechanical processes; dust storms, construction, demolition, mining and agriculture being among some of the operations causing them.

By contrast, the tiniest fine and ultrafine particles are through chemical processes and may exist as either simple or multiple compounds. Take, for example, the production of elemental carbon where the particles react with other compounds in the atmosphere and carcinogenic and mutagenic particles are adsorbed on to their surface. These combinations can have complex effects on the body.

What others are saying about diesel emissions

How do you tell one dust from another?